This is a transparent attempt to kick the matter to the other side of the Eastleigh by-election:

Police announced on Monday that they will meet with party officials to discuss the allegations.


If Lord Rennard is guilty of what he is accused of- propositioning women who worked for him and stroking their leg etc- then it is a case of sexual harassment and the women in question are entitled to some redress from the party that failed to discipline him.

But it seems extraordinarily unlikely that any crime has been committed- an unwanted pat on the knee is unpleasant but it doesn't make him Jimmy Savile.

All referring it to the police does is give the party an excuse not to discuss the matter before the polls close in Eastleigh.
Posted by Ross at 10:03 AM 5 comments:

Legging It From Justice.

The decision to grant Oscar Pistorius bail os strange. The argument his defence and the judge have made is that because he is so famous he could not possibly skip bail.

Surely the internationally famous find it easier to escape a jurisdiction than mere plebs. Someone like Roman Polanski was extremely well known when he escaped a rape charge. Being famous makes someone more recognisable but it also opens up a far greater array of destinations to escape to than would otherwise be available- Julian Assange wouldn't have been granted asylum by Ecuador if he were just an everyday rapist for instance.
Posted by Ross at 10:18 AM 4 comments:

A friend of mine who is a butcher put up a "No Horse" sign in the shop he works at, as a jokey reference to the horse meat scandal last week. Yesterday someone asked if they could take a photo to use to illustrate media stories, and today, the BBC, Reuters and the Guardian all use the image: 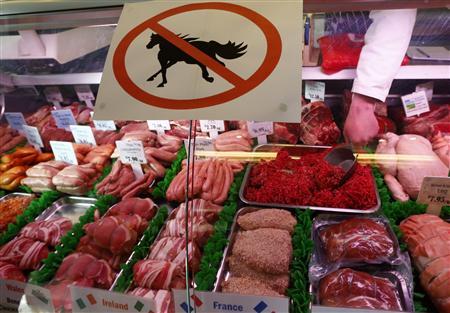 They didn't actually plug the shop the sign is at though.

The man contacted advertising watchdogs after being bombarded with ads telling him his penis size was a "disappointment" and that his partner might be "turned off".

I have a lot of sympathy for the complainant in this case as I've also been bombarded with emails telling me I need to increase my penis size.

I really shouldn't have given my email address to my wife.
Posted by Ross at 12:12 AM 3 comments:

Poverty Pimps Hoist On Own Petard

However the poverty industry rightly warns that the figures are misleading, because they have only declined because the incomes of middle income workers fell faster than those of people on benefits during the last few years.

They are right, but the only reason why we use relative poverty figures in the first place is because activists used them to imply that poverty levels were far higher than they appeared to be using absolute poverty figures.

In the years when we were all getting richer relative poverty was the only way to make it seem as if poverty was not declining at an impressive rate.
Posted by Ross at 10:51 PM 1 comment:

Email ThisBlogThis!Share to TwitterShare to FacebookShare to Pinterest
Labels: Poverty

David Cameron has declined to stop listening to the Smiths, despite being ordered to by Johnny Marr (whose banning tweet was endorsed by Morrissey).

I have a confession to make- I am also a fan of the Smiths*. Like all Smiths fans there does come a time when one has to accept that despite making some of the best music of the last 50 years, the band themselves were complete bell ends. At least the two principle men- Morrissey and Marr.

Apart from their personal behaviour- they famously got together to defraud their fellow band members of royalties (before penning a ditty about materialism and greed no doubt), the pronouncements of either of them on politics are infantile and dogmatic.

Most Smiths fans do accept this, I follow a 'Smiths' page on Facebook and even most of the comments there- a page frequented by people whose main thing they have in common is they like the Smiths- agree that Marr is being a twat.

* It is a marmite like taste. Most people reading this will think that they're whiny and depressing.
Posted by Ross at 10:08 PM 3 comments: