Won't government educationalists make up their minds? Yesterday it was reported that:

Schools have been told to encourage boys to play netball and take dance lessons in the name of equality.

Thousands of schools are being forced to ensure that pupils are more "gender balanced" as part of discrimination legislation introduced this year.

They must also ensure more girls study traditionally masculine subjects such as science, while increasing numbers of boys take options such as drama or dance.

But today I read that:

Young boys should be encouraged to play with toy guns and other weapons at nursery to get them interested in education, according to government advice.

The guidance urges nursery staff to resist their "natural instinct" to stop boys playing with weapons in games with other toddlers.

The policy might be a bait and switch technique to trick young boys into thinking that school will be fun when they're very young and then once their guard is down stick them in a tutu and force them to prance around.

The dangers of encouraging boys to take up dancing lessons are all too well demonstrated by this story from the China Daily:

Belly dancing has become a new fashion among boys in the southwestern China's metropolis of Chongqing, as a means of body maintenance, especially when developing a flat stomach.

The accompanying photographs make it pretty clear what sort of 'boys' are taking it up: 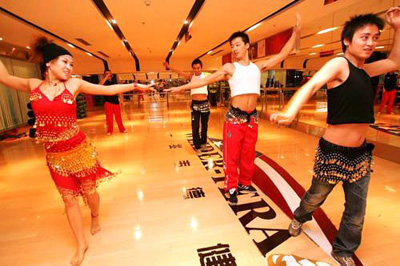 It looks like a training camp for China's next generation of children's television presenters!
Posted by Ross at 7:20 PM