The former Big Brother "star" Imogen Thomas has been named as the woman who had an affair with a married footballer. It seems terribly unfair that he can, in getting an injunction, simultaneously portray her as a slapper whilst protecting him from being outed as a tabloid love rat.

Still she is apparently moving on with life and pursuing a music career- she's been doing gigs in the North West for some time already apparently.

Someone down the pub told me that.
Posted by Ross at 7:26 PM 4 comments:

Why is it that trade unions lobby politicians on behalf of spies from a regime that bans independent trade unions?
Posted by Ross at 12:27 PM 1 comment:

Vote For Me Peasants.

Like most people I am glued to the Canadian election which will deliver pretty much the same result as the last few.

Even so the hilarious implosion of the Liberal leader Michael Ignatieff is fun to behold. Essentially he lived his entire adult life outside of Canada until he swanned in a few years ago to be anointed Liberal leader and PM in waiting. Footage of him describing himself in those years as "an American" (despite having denied doing so) is destroying his campaign.

Ignatieff is best known here as one of the talking heads who used to appear on chin stroking fests like the Late Show so he is sort of the equivalent of Tom Paulin or Johann Hari.

As you can imagine Canadians aren't impressed.

The only parallel I can think of is the Australian monarchy referendum in which similar celebrity intellectuals- Germaine Greer, Geoffrey Robinson etc- flew in to tell Australians that they shouldn't be ruled by people with no connection to Australia and then flew out.

In short Ignatieff is probably a perfectly nice man, but to have picked him as leader suggests that despite the many protestations to the contrary intellectuals really don't get the notion of patriotism.
Posted by Ross at 12:09 AM No comments:

At Orphans of Liberty, concerning the police clampdown on..... racist karaoke songs.
Posted by Ross at 11:46 PM No comments:

Email ThisBlogThis!Share to TwitterShare to FacebookShare to Pinterest
Labels: Orphans of Liberty

A new blog has been launched- Orphans Of Liberty- and they've very kindly asked me to be one of their contributors. So I will be using that site for my extensive collection of free form poetry- in Klingon posts relating to liberty.

"So what is Orphans of Liberty like then?"- I hear you ask. How the hell would I know, it's new. However there are some top drawer contributors so it has potential.

This site, as it approaches it's half decade- will remain as it was and will still be updated regularly.
Posted by Ross at 9:45 PM 5 comments:

Email ThisBlogThis!Share to TwitterShare to FacebookShare to Pinterest
Labels: blog

The Art Of Selective Quoting

In the Guardian Mehdi Hasan does one of those hackneyed "wasn't Churchill terrible" pieces that are a staple of psuedo-contrariness. All the boxes are ticked- Gandhi, Women's suffrage, racism, war mongering, drink etc. An old canard rears its head:


anticipating the crimes of Saddam Hussein more than 60 years later, said he didn't understand the "squeamishness about the use of gas . . . I am strongly in favour of using poisoned gas against uncivilised tribes [in Iraq]."

As it stands the quote is horrendous. However the the actual quote in full is:


“It is sheer affectation to lacerate a man with the poisonous fragment of a bursting shell and to boggle at making his eyes water by means of lachrymatory gas. I am strongly in favour of using poisoned gas against uncivilised tribes. The moral effect should be so good that the loss of life should be reduced to a minimum. It is not necessary to use only the most deadly gasses: gasses can be used which cause great inconvenience and would spread a lively terror and yet would leave no serious permanent effects on most of those affected.”

In other words Hasan has taken a quote in which Churchill expresses a desire to avoid killing people and preventing unnecessary suffering and excises enough of it to appear as though he is urging mass murder against the Kurds.

Later in the column he complains that Colonel Gadaffi is being unfairly maligned.
Posted by Ross at 8:34 PM 5 comments:

I've decided to lay off the speculation about Vladimir Putin's sexuality for a while. After all only a vigourously heterosexual man would be so concerned with getting millions of Russian women up the duff.

So here is a nice picture of Vlad enjoying a day out with some bikers: 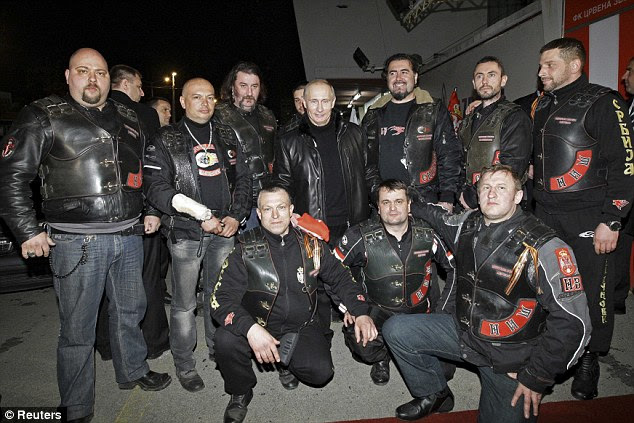 Ed Balls on Chancellors of the Exchequer:


After 18 years of measured tones from Tory grandees followed by 13 years of Scottish gravitas, we are not used to hearing our chancellor sounding excitable and impulsive.

If only we had a Chancellor more like Gordon Brown....
Posted by Ross at 1:16 PM 3 comments:

I'm going to be voting yes to the referendum on AV not just because all the kool kidz are doing it for the simple reason that a system where the only party on the right that can plausibly win seats- The Conservative Party- is a highly centralised institution that can easily marginalise any views unpopular with the ruling clique is not a desirable situation.

As it is, my only plausible option in a competitive election is to vote Conservative because- despite all their flaws- I find them far preferable to Labour and the Liberal Democrats. Consequently they have zero incentive to care about my opinions.

There is a bit more of an option at the voting booth for those on the left where there are a grand total of two parties- one of which is in coalition with the Conservatives. The general principle is the same though- more options will prevent the Labour party taking left wing voters for granted.

I've also been rather appalled at the tactics of the NO2AV camp which has scaremongered shamelessly (the infamous baby ad springs to mind) and punishing them would be satisfying.
Posted by Ross at 7:59 PM 8 comments:

Justice- Not Only Blind But Retarded

I find this story almost unbelievable, it's something you'd expect from Cuba or Russia not the United States:


21-year-old Evan Emory of Michigan has been sentenced to two months jail time after filming and posting a video featuring him singing a sexually explicit song to elementary school students. The only thing is, Emory never did that. He actually sang an appropriate (and apparently well-received) song to the kids and edited in the other song (which the kids never heard) later for a comedy video.

He has also been banned from approaching children under 17. If they're jailing people for bad comedy why not start at the top and throw the creators of "Funny or Die" into the slammer?

The parents were angry that he had misused images featuring their children which is fair enough, there probably is an issue relating to licencing the images of the children that merits a fine. However their anger was quite palpably not in proportion to the actual offence and their grievances were pandered to as though they were angry Muslims- with the prosecution initially going for a 20 year prison sentence and the aggrieved parents arguing that this is what he deserved.


PS- bonus points to anyone who spots what the title refers to.
Posted by Ross at 7:39 AM 3 comments:

Tell me if I am missing a step here:
Whilst I do see why protecting Benghazi from a massacre is a worthwhile objective extending the mission to depose Gadaffi- an admittedly disgusting creature- sends out a message to all of the other states in the international rogues' gallery- "Don't give up your WMDs under any circumstances or you will be annihilated".
Posted by Ross at 12:20 AM 4 comments:

Fear Of The New

It can be bizarre to see how irrationally wedded to the status quo people are.

For example when US liberal blogger, Matthew Yglesias, draws attention to the insane use of occupational licencing in the USA- for things like cutting hair- hordes of commentators pour on arguing that it would be incredibly reckless to to allow people to become barbers and hairdressers without satisfying a regulatory board or otherwise they would be over run with " Lice, hepatitis, using hazardous substances".

I've never been given hepatitis by the people  who have cut my hair despite the lack of a similar regulatory regime in the UK. Whilst I wouldn't go as far as say Milton Friedman and end licensing for all professions including medicine, it is clearly a silly and wasteful practice in most cases.

Irrational fear mongering about the new brings me on to the impending referendum on the Alternative Vote. While there are legitimate causes for concern about AV*, the claims being made by the NO2AV campaign are scaremongering on a par with """"" unless you licence hairdressers you will get Aids".  The evidence that it provides a massive boost for extremists can easily be shown to be false simply by looking at Australia where it is already in place and fewer minor parties have representation than in the UK.


* It seems likely that it will produce even more disproportionate results than FPTP on occasion for example.
Posted by Ross at 11:19 PM 7 comments:

Oxford University has hit back at the prime minister after he said only one black UK student began a course there in 2009 and called it "disgraceful".

The university said David Cameron had been "incorrect and highly misleading", and that at least 26 black British undergraduates started that year.

Mr Cameron was answering questions about the effect of raised tuition fees on poorer students.

Downing Street said the figure of one black Caribbean student was accurate.

You have to feel for Oxford University, this is like trying to argue with a 5 year old. Why not simply admit he was mistaken instead of transparently shifting the goalposts to defend a different assertion to the one which was actually made?

It shows that David Cameron is on most things except public spending, not particularly conservative and his basic assumptions are similar to those of David Lammy- whose figures he was using:

- Cherry pick a number that shows a racial disparity.
- Make no effort to investigate why it exists.
- Blame an institution with, no real evidence.

The sad thing is he is accusing real people of doing something vile, in order to win votes even though even a cursory look at the figures shows that Oxbridge has no real case to answer. Of the 30000+ candidates who receive 3 As at A-Level (which is generally the minimum for the two universities in question), around 300 are black. In other words around 1% of eligible British candidates are black which is pretty much reflected in the actual ethnic make up of Oxford and Cambridge.
Posted by Ross at 10:28 PM 5 comments:

This Will No Doubt Be Edited Away Soon

The Wikipedia entry for Sunny Hundal.
Posted by Ross at 6:04 PM 5 comments:

Dim posh former intern is of course a beneficiary of internships.

* The parody horizon is when a piece is impossible to parody because the parody would be indistinguishable from the original.
Posted by Ross at 10:59 AM 6 comments:


After Pakistan’s defeat at the hands of India on Wednesday, Pakistan’s captain, Shahid Afridi, garnered praise from the Indian media for his graciousness in defeat.

By Monday, that atmosphere had evaporated after Mr. Afridi returned home and made comments of a much different tenor.

Asked by a chat show host on Pakistan’s Samaa TV station about what it was like playing in India and the feeling he got from the Indian public, Mr. Afridi had this to say:

“If I speak truthfully, they just can’t have the kind of heart a Muslim has or a Pakistani has. I think they don’t have the sort of big hearts, pure hearts, Allah has given us.”

The comments elicited applause from a studio audience.

Makes our athletes look like Socrates in comparison.
Posted by Ross at 7:34 AM 7 comments: