Jonathan Freedland writes about the Premier League's new television deal and how it shows that English football is now a global product that just happens to be in England. This is not really true.

It is certainly true that the new television deal is phenomenal at 5.1 billion pounds over three seasons it makes it the second wealthiest sports competition in the world. Only the NFL generates more cash and soon the 20th richest Premier League club will be able to outspend every club abroad apart from Real Madrid, Barcelona and Bayern Munich.

However the important detail is that the new deal is for the domestic rights, not the global rights. It is the competition for UK pay television rights that is driving the growth, the foreign markets are an important bonus but they are not what is primarily funding English football.

Whether this shows that nothing else can drive subscription television in Britain or that British football supporters are very rich is an open question.
Posted by Ross at 7:38 PM 4 comments:

Something I hadn't realised about Brewdog when I did my unpaid advertising for them on Friday, is that in one important way they have in fact followed in my footsteps, by pointing out how unconvincing Putin's heterosexuality is:

A Scottish brewery has launched a ‘not for gays' beer in protest at Vladimir Putin’s anti-gay laws, and have even sent a crate to the Russian leader himself.

The limited-edition ‘Hello, My Name is Vladimir’ beer features a Warhol-esque impression of Vladimir Putin wearing make-up on its label and the satirical *not for gays small print across the bottom.

BrewDog, the brewery responsible for creating the ‘protest beer’ included the following description on the labels: “Hello, my name is Vladimir. I am 100 per cent hetero and will pass laws to prove it.

On the subject of the camp Cossack, negotiations with Putin over the war in Ukraine are a complete waste of time. Russia has broken every treaty it has ever signed with respect to Ukraine and its assault will only be stopped if the Ukrainians are given weapons to fight back. It is much like the wars in the former Yugoslavia in that regard, the peace treaties signed by Belgrade meant nothing until Croatia was given the resources to fight back.
Posted by Ross at 10:34 PM 2 comments:

There is a lot to admire about the Scottish brewery Brewdog, the guys at Samizdata have previously celebrated Brewdog's glorious contempt for the nanny state and they do make some really good beer. Their growing chain of bars are also worth visiting, with quality beer, exceptionally good service and a relaxed atmosphere.

Yet I have to admit my enthusiasm for the purveyors of craft beers is very different from my antipathy for the real ale community. Partly that is because they are much more prescriptive about what constitutes a real ale, but that is not the whole reason. The similarities between real ales and craft beers are too great to pretend it is about taste. No at the end of the day I have to admit that I have hipster tendencies, craft beers are appreciated because compared to the real ale guys, they are cool, sophisticated and not in anyway  associated with people who aren't like this: 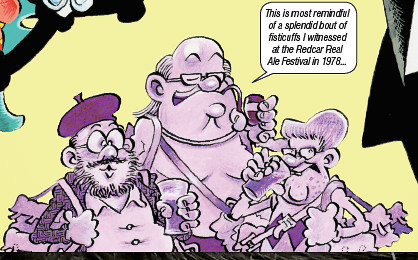 Email ThisBlogThis!Share to TwitterShare to FacebookShare to Pinterest
Labels: Alcohol

It is good to learn something new and unexpected about a subject which you believed you had thought about it some depth. The economist Paul Collier's book about immigration, Exodus, revealed something counter intuitive but actually very logical about how immigration works:

This is surprising but makes sense when considering it from the point of the migrant. It is known that the presence of a diaspora facilitates the ease with which people can settle in a country, so if a community integrates quickly into society there will be little or no diaspora with extremely close ties to the country of origin, which will slow down migration. This makes sense, there is no functioning Australian diaspora in the UK beyond first generation short term migrants because our cultures are so close that integration is nearly inevitable, on the other hand there is a distinct Bengali diaspora that acts as a magnet for further Bengali immigration.

The implications for immigration policy are profound, without either restrictions on immigration or some method of hastening integration, migrants will, over time, come from cultures that are hardest to integrate into society.
Posted by Ross at 5:51 AM 2 comments: