Over at the Pub Philosopher blog Steve links to a study that claims that historically protestant countries are more economically successful than others with lower unemployment rates, and also noting himself that the same countries are also the least corrupt. It isn't an entirely new theory as Max Weber's idea of the 'Protestant Work Ethic' was written more than a century ago but it has been out of fashion for a while. Incidentally the same set of nations are also the most creative from a scientific point of view: 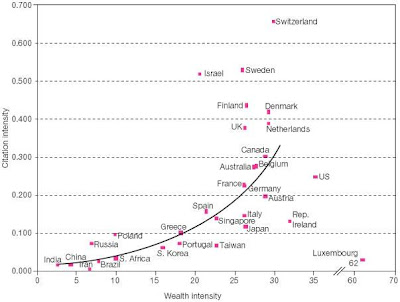 There is certainly a trend to be explained here, but instead of protestantism causing
the 'work ethic', it seems equally likely that societies with a positive attitude to hard work would mould their religious beliefs to reflect that.
Posted by Ross at 9:49 AM

Israel up there behind the Swiss?

Yes Israel's performance is extremely impressive. particularly considering that it isn't a particularly wealthy country compared to many that it outperforms.