Ming Campbell Resigns..... No I Don't Care Much Either.

When Henry Kissinger was asked why academic politics are so vicious he famously replied "because the stakes are so small". This maxim applies in spades to the Liberal Democrats who have now knifed two leaders in the back since the general election. Blogs like Iain Dale's or Political Betting are probably the best place to go to see who is likely to succeed Ming but honestly- Clegg, Huhne, Davey, Kennedy, Hughes, Opik, why bother learning any of these names when they'll only be dumped by the party in a year's time? Think of all the time wasted learning that 'Menzies' is pronounced 'Mingis'! However since this is a political blog I still feel that I ought to provide a guide to the Liberal Democrats leadership options. There are in my view three main options:

Mark Oaten- I like the cut of his jib, in times of crises the Lib Dems need a solid family man like this to steady the ship. The contents of his brown box are more than a match for whatever Labour take out of their red boxes. 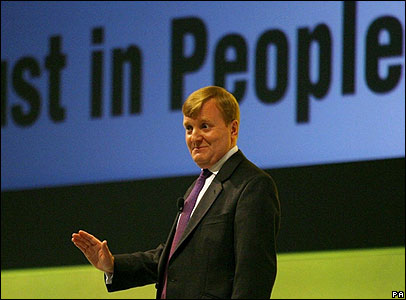 Charles Kennedy- Well how sober to you need to be to lead the Liberal Democrats anyway? Gabriela Iminia- A strong candidate with rare gravitas among the parliamentary party, but her partnership with Lembit Opik might just make her hard to take seriously.
Posted by Ross at 8:55 PM